What the Heck is a QR Code? 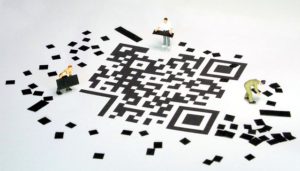 This is the first in a series of four brief articles on QR Codes. We’ll start with a description of what QR codes are, where they came from, who uses them, how they are used and discuss where is this technology going.

We are all familiar with the bar codes or Universal Product Codes on soup cans and many other products. In recent years, we are seeing something called a QR Code (Quick Response code) on advertisements, coupon & contest announcements, product and a whole variety of other places.

Invented in Japan by the Toyota subsidiary Denso-Wave in 1994 to track vehicles during the manufacturing process, the QR Code (Quick Response code) is one of the most popular types of two-dimensional barcodes. In 2002, Japanese innovators developed the idea to enable their new mobile phone cameras to act as barcode scanners. These innovators envisioned that such technology would be capable of instantly connecting users to URL addresses on the internet with the snap of a picture. The ISO/IEC 18004:2006 standard defines the QR Code technology and this applies to all QR codes we create.

QR codes are only one of several ways to convey information but they are fast becoming popular for their ease of use and capability to convey larger amounts of information. The commonly used barcodes typically contain perhaps 12 to 20 characters whereas QR codes can contain up to 4,296 alphanumeric characters. QR codes with a high level of error correction, or the ability to still read the information if part of the display was torn or damaged, would contain up to 1,852 characters. QR codes are extremely versatile and can accommodate special characters, numbers, symbols, text, and control codes in numeric, alphanumeric, binary or kanji formats. Printed QR codes are susceptible to damage such as having part of the display torn away however error correction can restore up to 30% of the original information and potentially still convey sufficient information upon which the user may act.

Some companies have found that imprinting a QR Code on a printed document provides a means to better control and manage documents. Paper-based hyperlinks in the form of QR codes are overtaking the use of the ‘tiny URL’ sites that render a long multi-line URL to a much shorter reference string intended to make it easier for the user to access the URL. QR codes are easier to use and can contain information to guide the user to a website by simply pointing their QR Code Reader Smartphone application at it.

Once, only a vision, QR codes are now reality. QR code usage is gaining ground in North America and we can use them today… “Yes, there’s an APP for that.” We use our Smartphone QR Code reader applications to obtain information such as links to websites, display phone numbers and product & service descriptions etc. This is only the tip of the iceberg… there is much more we can do and we’ll see that in later posts. We have progressed past the point of simply being interested in QR codes to becoming active users of them. In January 2012, eMarketer, a Digital Marketing and Media firm survey found that 81% of Internet users recognized a QR code and that well over 90% of the top 100 magazines in the US have featured at least one mobile barcode since May 2011.

Let us know your interest and use of QR codes in your project and document control work. This new technology has even more capability as we will see in future articles.

Until then, “How do you think QR codes would help you as a Document Controller?” (This is our second article on QR codes)